It’s heating up in Doha now with sandstorms and summer temperatures.  But I recently enjoyed a change a scenery – a ski holiday in Austria with my family. Having lived in the desert in Qatar for eight years now, we love this annual trip to be amidst tall mountains, pine trees, rivers and snow. But this year was different as we also learned about failure / setting yourself up for success. 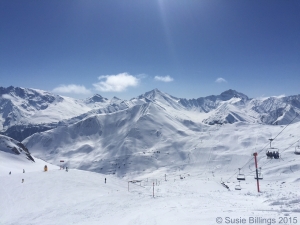 I fell in love with skiing when I was a teenager. Neither of my parents skied but there were organized all inclusive weekend bus trips from my home town to a beginners ski slope that I went on and I was hooked. The man I married had never even seen snow when we started dating, so I quickly introduced him to skiing and he got up to speed fairly quickly. When we had kids we started both of them in ski school as soon as we could after they turned three!

They are now teens / pre-teens and for the last couple of years we haven’t needed ski school for them. We’ve been able to ski as a family exploring all the ski slopes together. 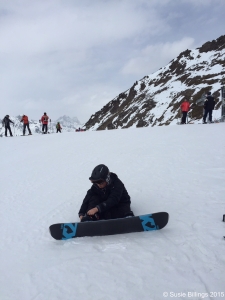 This year though our eldest decided it was time for him to switch from skis to a snowboard and asked if we would enroll him in ski school to make the switch. We agreed but was surprised when we arrived to find out that the snowboard group lessons were a three day package and didn’t start until day 3 of our 7 days of skiing as we had arrived before their normal week start.

Fortunately the equipment rental place were very flexible and agreed to switch between a snowboard and skis as required, so the first two days he skied with us. Then he swapped over and began his three days of group snowboard lessons. The lessons were in the morning and then he had the afternoon to practice what he learned on the bunny slopes.

We would check in with him after the lessons and have lunch together and then leave him to continue practicing.

Day 1 went ok with him focused on trying even though he was falling over… a lot. He kept catching the front or back edge and hitting the snow quite hard. He just wasn’t getting his balance right. 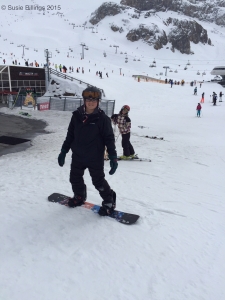 f to the lesson in good spirits but did mention to us that he was the only kid in the group lesson. Everyone else was 10-20 years older than him. When we met him for lunch he was dispirited and sore. He hadn’t yet found his balance and was still falling a lot. Plus it seemed he was really beginning to feel lonely as the other folks had buddies to practice with in the afternoon and he didn’t have anyone.

Day 3 came and he woke up very sore and frustrated and really didn’t want continue the lessons. We talked about perseverance, and how none of us were great skiers by day 3 either and we had all fallen down in the beginning. He couldn’t remember that part as he was only 3 and a half when he started but agreed to give it another go.

About 2/3rds through his several hour lesson we got a phone call from him asking if he could please stop and could we please come meet him. He said he felt like a failure but just couldn’t continue as he just wasn’t enjoying it at all. We were able to meet him and before lunch were able to swap his rental snowboard back to skis.

We headed back out to our normal slopes and he now was struggling on his skis. His confidence in his ability had been hit pretty hard. He had fallen so much on the snowboard he was now afraid of falling on his skis and was mentally sinking even lower and feeling even more like a failure.

As a parent / boss / motivator it made me reflect on how we handle failure. It is so easy to turn in on ourselves which can lead to a self fulfilling spiral down which is what I was witnessing with our son. We talked about the different elements of his experience that evening and came up with a few key points.

1) He should be proud of himself for taking the initiative and trying something new. He has a new appreciation of the skill involved.

2) He should not berate himself for not being a pro snowboarder straight away. It took him several years as a little kid on skis to work up to tackling black runs and over time his skiing had become more controlled and graceful.

3) He could feel confident that he hadn’t lost his ability to ski, he just needed now to relax and rebalance and he’d be back to par quickly.

4) In hindsight, it would have been better if one of the family had also learned to snowboard with him. That way he would have had a partner and wouldn’t have felt left behind while the rest of us were exploring the mountains. He was really limited to one beginners run because of his skill level. Or it may have been different if there had been other kids his age that he could have hung out with and practiced with.

5) If / when he tried again he would go in with more realistic expectations and possibly wear more padding and have better, more waterproof gloves! I think we all assumed because he skied and skateboarded that it would be an easy transition. But looking back we realized that he did have some balance issues and it took him a little longer to learn to ice skate and ride a bicycle. He does both very well now but he really had to work hard to get his balance just right.

6) He’d learned about his limits.

The next day, after a good nights sleep he got back on his skis and was quickly back to his normal self, confident and able to tackle anything on the mountain. 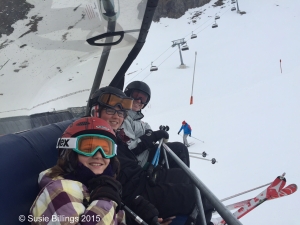 I think we all came away with a better sense of what We can do in the future to plan to succeed. There are lots of inspirational stories of people who have failed, and either persevered, changed their plan of attack, or learnt from their failures and gone on the succeed in other arenas.

From JK Rowling having her Harry Potter manuscript being rejected time and again until someone recognized its marketability and published it, to Michael Jordan missing key shots in a basketball game but keeping his head in the game and practicing til he got better and better, to Edison iterating / failing 10,000 times to make a suitable lightbulb.

Sometimes we stay in our comfort zones and don’t progress which leads to failure. Often given example is the buggy whip manufactures who focused on making a better buggy whip instead of recognizing the radical change that automobiles would bring.

In our son’s case, we were on holiday and having fun as a family. He was missing out as he couldn’t go from zero to expert in three days. As he transitions from skiing with his parents to skiing more with his peers as he gets older, he may want or need to tackle snowboarding again. But if / when he does I think he will be in a much better place to try. So that doesn’t sound like failure to me at all.

What about you? What do you want to try that’s new to you? How will you plan to succeed?

One thought on “Lessons learned on holiday” 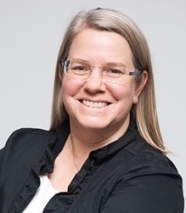 Please feel to browse, explore and comment constructively as this site slowly builds.

This site, like me, is eclectic. It will reflect a broad range of interests and activities.

I have lived on four continents and worked at senior levels across a range of industries.

Since 2007 I have lived in Doha, Qatar, the home of Al Jazeera and the host city for the World Cup Football (Soccer) in 2022.

Hope you find something here of interest!